How Professionals Use PerfectIt

PerfectIt helps check text faster and better than ever before. But what's the best way to use it? We asked 100 users how they run PerfectIt. 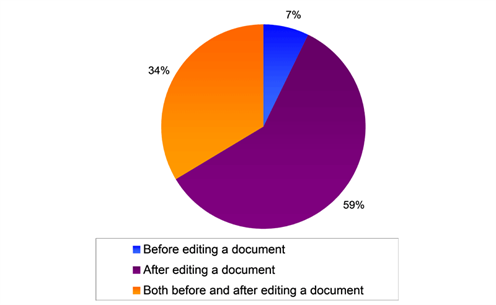 When professionals use PerfectIt for checking text

The majority of users (59%) run PerfectIt after they edit / proofread the text. However, some 4 in 10 users also, or only, run PerfectIt before they edit their text. Why are user habits so different? We found four themes among their answers:

We look at each of these themes below.

PerfectIt reduces the amount of time it takes to check text. A number of professional editors who filled in the survey said that they could deliver work to their clients faster if they ran PerfectIt at the start. One editor described how he / she uses PerfectIt before, "because it eliminates a lot of problems at the start, saving me time when editing."

However, others found they save more time running PerfectIt at the end. They didn't want to spend time at the start if the text was going to change radically. This was particularly the case for editors working with clients for whom English is their second language.

“We get documents into better shape first - then we run PerfectIt after each editing stage and twice before sending manuscripts back to clients.” — Andrew Mulley, Academic Editing @BEH

When PerfectIt finds a possible error, it shows the user the location in the document. That enables users to see the context before making any changes. But some users go one step further and like to understand the full document before checking consistency. So they run PerfectIt afterwards. As one professional editor noted, "I need to be familiar with the meaning of the text before I can determine whether PerfectIt's suggestions makes sense - there are sometimes good reasons to break the rules, and I can't tell whether they apply until I've been through the text."

Giving Attention to the Changes that Matter Most

When working on text and its meaning, it helps to not be distracted by inconsistencies. By running PerfectIt first, inconsistencies can be eliminated before editing begins. Among users that run PerfectIt before they start, this was perhaps the most common reason. One editor described how PerfectIt, "catches repetitive errors, so I can correct the 'mechanical' errors beforehand and focus on the actual editing in the next pass."

Ensuring No Errors Slip Through

Users of PerfectIt take pride in making sure their documents are as good as they can be. So it's no surprise that many respondents choose to run PerfectIt after they edit a document as a final check to make sure that no mistakes, no matter how small, slip through the net.

“I run PerfectIt after I edit to catch all the little errors I missed while I was concentrating on the big ones.”

However, it's not just mistakes that are missed. The best translators and editors know that their work can never be perfect; and that the worst kind of mistake is one that gets introduced while they are improving the rest of the document. They run PerfectIt after they have finished editing to guard against that possibility.

Before, After or During

Perhaps the most revealing fact our survey showed is that not a single user runs PerfectIt instead of editing / proofreading the text. Put simply, editing a document can't be done with software checkers alone, and professionals from all backgrounds recognize that. Instead, they use PerfectIt before or after editing because it helps them to save time, focus on errors that matter most, and ensure that no mistakes slip through.

Are you ready to try PerfectIt? PerfectIt is available for PCs with MS Word and it's free to try.